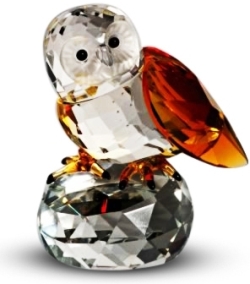 For thousands of years, the owl has been a creature to which people have attached special significance. Primitive people have many superstitions about the owl, chiefly because of the peculiar cries it makes. In many parts of Europe when an owl is heart to hoot, it is considered a sign of death. In ancient Greece, the owl was a symbol of wisdom.

Owls of one species or another are found in all parts of the world. In the frozen arctic districts, owls have snowy white plumage which blends in with their surroundings and keeps them safe from their enemies. In parts of Texas there are owls so tiny they are no bigger than a sparrow, and they feed on grasshoppers and beetles. The owl is a bird that really comes to life at night and its whole body is especially suited to this kind of life. The owls can open the pupil of its eye very wide which enables it to make use of all the night light there is. The eyeballs of the owl are elastic. It can focus them instantly for any distance. Their ability to see in the dark is a remarkable ability!

Like most wildlife in their natural habitats, owls are not likely to be seen often. Nocturnal and often solitary, they are usually shy of humans and avoid them when possible. Specialized wing feathers allow them to fly silently, enabling them to catch prey easier and avoid detection. Owls are specifically adapted to hunting at night or in low levels of light.

Owls are nocturnal hunting birds with eyes that face forwards. They are closely related to hawks. Owls sleep during the day and emerge at night to hunt small prey. There are about 162 different species of owls alive today.

Owls have a large head and large eyes that face forwards unlike other birds, whose eyes are on the sides of their head. This eye placement gives them binocular vision. Owls cannot move their eyes within their sockets like we can. In order to look around, they have to move their entire head, which has a range of movement of about 270°.

Owls function extremely well at night. Their ability to see in the dark has elevated owls, in some cultures, to manifestations of wisdom. In Western folklore, owls are commonly associated with studious scholars and wise elders.  Perhaps the earliest known link between owls and wisdom is their association with Athena. The Greek goddess of wisdom is often depicted holding an owl.