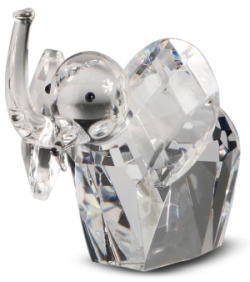 In most cultures, the Elephant is seen as a symbol of strength, wisdom, good luck.  Elephants should be placed by the door or up on a mantel. Their trunks should be up.
White Elephant is the purest of all form and is believed by many to be the incarnation of future Buddha. In Indochina and India, only the Kings are allowed ride on the elephant. Elephants are sacred animals in Thailand and India, and they represent loyalty and wisdom.

In his book, Animals Speak Ted Andrews points out an interesting connection between humans and animals, Elephants and their symbols, their trunks …
“Many ancient myths and stories speak of magical time and place in which there were no boundaries between humans and animals. Animals and  humans spoke. Wild and tame had no meaning….. The natural world and the animals within speaks to us everyday: by their appearance, behavior, movements, and characteristic patterns….Animals have often been attributed with fantastic qualities, and if nothing else, this attribution helps us appreciate the natural world fully. Every animal is a gateway to the phenomenal world of the human spirit.”

"In India and southeast Asia elephants are venerated, and the symbolism of the elephant is multiple. It is a symbol of royalty and fertility. The Hindu god of wisdom and success, Ganesha, is usually depicted with an elephant's head. The god Indra held several roles in which an elephant plays a part. As the king of gods, the elephant was the royal mount. As the god of warriors, the elephant was Indra's super weapon. As the god of rain, Indra used the gray elephant to bring forth the monsoons…..”

The elephant's trunk, according to Andrews has some special symbolism associated with it: "Because the elephant has relatively poor eyesight, it relies heavily upon its sense of smell... the sense of smell is a long time symbol for higher forms of discrimination.... smells may become an aphrodisiac for those with this totem.... it (the trunk) reflects that through increased sensitivity of smell that the elephant stimulates, you can open to energies and worlds otherwise unaccessible….The elephant has a most auspicious symbolism. They embody strength and power, especially power of the libido. male elephants are more likely to rage out of control when in rut. Because of this the elephant is seen as a symbol of great sexual power."